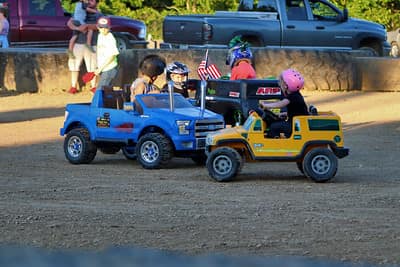 How to Make Power Wheels Go Faster? The usual speed of power wheels isn’t for your little racers? well we have everything is covered and let's Learn how to make them go faster.

Power Wheels have been gaining a lot of attention recently, due to their fun appearance and convenience. Kids usually love riding on vehicles, which is why the popularity behind Power Wheels is increasingly rising as well.

However, after some time, the usual 12V battery induced 5 mph speed control might turn out to be a tad bit boring, both for the child and the parents. When this comes to happen, you can either get a whole new Power Wheels to make up for the lack of interest in the old one, or DIY the already owned one.

While the former step might be more suitable to busy parents with a lot of cash lying around, the second step is definitely more gratifying for your kids.

By implementing only a few simple tricks and techniques, you can easily amp up the speed from a mere 5 mph to even 10 mph at most! DIY-ing a Power Wheels might consume a good amount of your time, but it is way cheaper than having to spend hundreds of dollars over a brand new model again.

Plus, you get to choose what speed you want your newly modified Power Wheels to have, so that is always nice.

Anyways, let us take it apart piece by piece so that you get a better idea about how to make Power Wheels go faster.

An ESC, also known as an Electronic Speed Controller, is a much required tool to have in your inventory if you want to tweak the speed settings of your child’s Power Wheels without taking apart its internal system.

An electronic speed controller is an amazing tool because it also works to show the level of speed induced into the Power Wheels, so you can always have a brief idea about how safe or dangerous the entire thing is for your kids. There is also a button that lets you turn the device on or off depending on your preferences.

Coming to the device itself, now you can either make one yourself, which is actually not too hard at all. All you need are the right parts for it, such as the wires, the connectors and pedals, etc.

However, if you do not have the time to make your own electronic speed controller, you can purchase it from many offline and online hard ware stores as well.

For example, many stores associated with selling toy vehicle parts will also provide electronic speed controller sets. These sets come with all the instructions that you might require to know in order to set the controller up by yourself. The only downside to it is the rather hefty price tag that is attached to it, though the controller set will definitely cost less than the Power Wheels itself.

This method is rather easier to implement than the rest of the methods mentioned on this article, however, make sure to only use this technique if your child is old enough.

You can tinker with the gear box and include a heavy duty suspension system into the mix, therefore increasing the Power Wheels speed by numbers. But again, only do this if your child is old enough.

The easiest way to amp the speed of your kids’ Power Wheels is to modify the batteries that come equipped in it. Power Wheels in general feature a 12 volts battery, which allows it to run on a speed of 5 mph in forward motion and around 2.5 mph in reverse drive.

By modifying the battery, you can increase the speed as you like. To do this, you will need to increase the voltage of the battery to at least 18 or 20 volts for best results. Try not to go over this limit as it may be too fast for very young kids.

In order to do this, you could pair up the original 12V battery with either a 6 volts or 7 volts external battery. This is a good amount of voltage, as any amount higher than this could potentially burn out the motors and gears of the Power Wheels.

You can either do all this right from the comfort of your own garage, that is, if you already have all the necessary parts and equipment. If not, simply take your dissected Power Wheels to any local hard ware store and let them do their job.

Make sure to always include a fuse system when modifying the battery, as it will help the original model protect itself in case things go haywire due to overloading.

Make sure to stick around during the entire process though, you do not want the voltage to be any higher than it already is.

In case you want to modify other parts of the Power Wheels alongside the speed as well, you can try out various different stuff that will set apart your child’s ride-on toy vehicle from the rest of the kids on the block.

For example, from wiring the reverse gear to even customizing the lighting system of the vehicle, you can turn your kids’ Power Wheels into a canvas of your own dreams and passions as well.

Not only will your child appreciate and enjoy the new fancy LED lighting system, but you will also have a great time watching your child drive on something that you personally modified.

If you want, you can also modify the sound system of the Power Wheels and include various different sounds and songs that will give the toy vehicle an even realistic vibe.

You can implement real car noises and sounds into the newly built-in subwoofer system of the Power Wheels, so that your child enjoys the experience of driving a makeshift Ferrari from a young age! You get brownie points if you customize the subwoofer with LED lighting as well!

Now that you have reached the end to this article, we are pretty sure that you know exactly how to make Power Wheels go faster than ever before! Thanks a lot for sticking around till the very end!

Related: How Long Does a Power Wheels Battery Last 2020?

I’ll be glad to share more about these products when given an opportunity I can share my findings and experience about power wheels and ride on cars for kids, wants learn more about us see About Us

DISCLAIMER Bestpowerwheel.com is a participant in the amazon services LLC associates program, an affiliate advertising program designed to provide a means for sites to earn advertising fees by advertising and linking to amazon.com. Amazon and the Amazon logo are trademarks of amazon.com, Inc or its affiliates.